Of the 3 eggs, 2 chicks have hatched and are growing very fast!

Here they are at nearly 3 weeks old having a stretch.

Posted by David Bagley at 16:01 No comments:

I’ve set up a temporary WiFi link so that it is possible to view the live camera video on your device. This is only available by standing in the Abbey Lawns next to the copper beech tree by the east end of the church.

Search for the WiFi signal called “falcons” and connect to it. The password is “peregrine” (with a lower case 'p')

This will bring up a log in page. Enter “guest” as the username and the password is “Peregrines”. (note capital 'P')

At the top of the screen, under “Embedded Net DVR”, there are the words “Camera 01” with a small black dot to the left of it. Select this black dot and the live video should appear.

On devices with a tall screen, eg phones, the picture is stretched, and I can’t find a way to correct this.

I’ve tested it on an iPad and Android phones, and it seems to work if the apps are kept up to date. It may not work on older devices or those which have out of date apps.

This is only a temporary setup. Hopefully something better will be in place for 2023.

Please bear in mind that these are wild birds which catch and eat other birds. There may be scenes which some people find upsetting.

Posted by David Bagley at 11:37 No comments:

The breeding season is now well under way and the peregrines are now sharing incubation duties for 3 eggs so far.

In this video you can see (and hear) that it is time for a change-over with CR having done his stint, Bella takes over again.

I will only update this page every now and then. Go to "Tewkesbury Abbey Peregrines" on Facebook for more recent news.

Posted by David Bagley at 20:26 No comments:

The two adult birds are shaping up nicely for this year's breeding season.

However it's touch and go whether a new tray will be ready in time. The steel framework is still being made and then the new wooden tray then needs to be built around it. A plan B is being considered...

Apologies for the lack up updates recently. There hasn't been much happening, so you haven't missed anything. 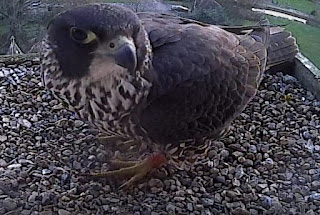 This is a still picture captured by the video camera on the tower the other day. 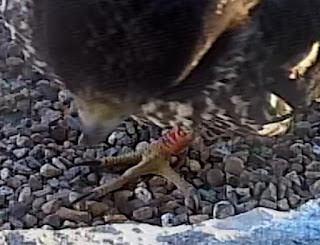 It is one of the two females who fledged last summer - P4N.

The camera has also seen the adult pair displaying to each other, so for the moment at least, there are three peregrines on the Abbey.

Posted by David Bagley at 21:06 No comments:

Unlike P4N, there's better news about her sister P7N.

Of the two, P4N had a better first flight. Here's how P7N left the tray...

Mind you, she managed to fly back the following morning and spent most of the day on the tray.

The next time she left the tray was also unplanned...

The good news is that she seems to be OK, and was spotted on the top of the tower the following evening. 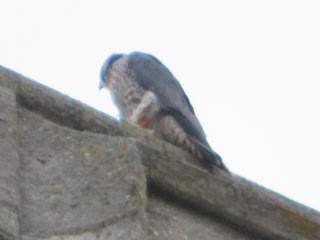 Let's hope she will survive her first year and go on to find a mate and breed elsewhere.

Posted by David Bagley at 13:34 No comments:

The last video wasn't too clear as to whether P4N flew back to the tray. I suspect that what actually happened was that she managed to cling to the sloping stonework to the side of the tray and what the camera saw was her arriving back.

There's no doubt this time that she is able to fly!!!

She ended up grounded in a garden on the other side of the Abbey a little later, and had to be rescued by the Vale Wildlife Hospital at Beckford the following morning.

When she was looked at by the vet, it turns out that she had received an injury and which left her blind in one eye. This meant that she will unable to be returned to the wild and hopefully will find somewhere to live as part of a captive breeding programme.

Posted by David Bagley at 20:39 No comments:

It's not possible to see exactly what's happened here, but it looks like P4N has just flown back to the tray. She certainly wasn't there a few minutes earlier as P7N has just been fed alone by the adult female Bella.

Hopefully more behavior like this will be seen over the next few days...

Posted by David Bagley at 13:55 No comments:

On Monday 24th May, licensed BTO (British Trust for Ornithology) ringers handled and ringed two of the chicks, both females. Each chick was given a unique metal ID ring (right leg) and an orange colour ring (left leg). The orange ring codes were P4N and P7N

They were then measured and weighed, coming in at 879g and 824g respectively. For 21 days old they were very well fed - we have been monitoring their prey which includes mostly starlings and feral pigeons.

Volunteers from the British Mountaineering Council helped access the nest and chicks. Sadly, despite the fact that the ringing was carried out at exactly the approved time in terms of the chick's age, and the climber carefully abseiling to the nest location slowly and carefully, one of the chicks (highly unusually) moved away from the nest tray and fell, sadly not surviving the fall.

Naturally such an event is taken very seriously and all procedures have been reviewed to ensure this is minimised at any future nests.

The lead ringer present on Monday is one of the most experienced Peregrine workers in the UK and has ringed 350 chicks in 14 years; this is the first casualty (0.3%) arising from such intervention. The good news is that next year our nest tray will be replaced with a much wider and deep nest tray which will be safer for the chicks.

The ringing of the chicks contributes to a wider study - we know that some chicks, especially males, from Gloucestershire stay local while others, especially females may move into the Midlands and further afield. The females head off further afield looking for males in new territories to avoid inbreeding. It will be interesting to know if these two chicks are re-sighted and if so where they end up.

Posted by David Bagley at 20:17 No comments:

At nearly three weeks old, the three chicks are thriving and are growing rapidly. Have a look at the sizes of their crops!

Their feathers are starting to show through.

Posted by David Bagley at 18:12 No comments:

The chicks are now 12 days old and as you can see are growing fast.

The adult birds don't need to brood them all the time now, in fact they are too big to fit under CR although Bella can just about do it.

Posted by David Bagley at 20:24 No comments:

The three chicks are doing very well and are growing fast.

A bundle of fluff!

What appears to be a bundle of fluff is actually three newly hatched peregrine falcon chicks!

Here is a clip of their dad CR keeping an eye on them.

It's usually the female who does the brooding while the male brings in prey, so it is actually rather unusal to see dad doing this.

Posted by David Bagley at 07:49 No comments:

All three eggs have now hatched!

Hatching took place on the 3rd and 4th of May.

Here is a video of CR brooding them, and you can see the chick just emerging from the egg nearest the camera.

Posted by David Bagley at 07:45 No comments:

I've been on the radio!

BBC Radio Gloucestershire got in touch for an interview, and I was happy to oblige.

You can hear it at HERE

Go to 45 minutes into the programme for my bit!

(It should remain available for a few weeks.)

You will hear from the programme that we now have three eggs.

Here is a photo of a changeover.

Hopefully, I'll be able to obtain some videos soon.

Posted by David Bagley at 21:01 No comments:

Incubation is well under way.

Here is Bella looking after her four eggs.

There are now four eggs being incubated!

This is more than in any previous year, and if all goes well, it's going to be very crowded on the nesting tray in a few weeks time.

Here is Bella leving the tray on Easter Day revealing what she has been sitting on.

The times and dates that each egg was laid are :-

The first egg of the 2021 breeding season has been laid, on or about the 26th March. This makes it the earliest that an egg has appeared on the Abbey tower. 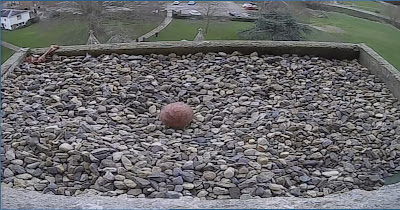 If things follow the same way as in previous years, we can expect three eggs, laid about 2-3 days apart. Incubation is about 29-32 days from the day the last (or penultimate) egg is laid, so this will put hatching at about May 1st.

Posted by David Bagley at 16:50 No comments:

Things are looking very promising for the 2021 breeding season.

Here is the female Bella on the nesting tray. After a little bit of scraping with her feet, she lay down and moved a few stones around.

Posted by David Bagley at 15:47 No comments:

The WiFi link is operational. 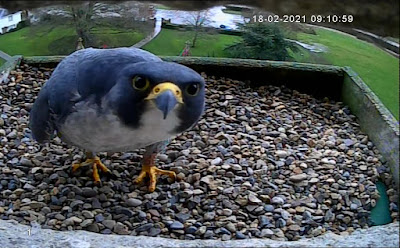 As in previous years, I've set up a live video feed so that anybody in the churchyard to the east of the Abbey can watch the activity on the peregrine nesting tray.

As of March 26th, the peregrines are sitting on some eggs, and by the beginning of May, these should have hatched.
While the birds are sitting on the tray they are usually out of sight, so this is the only good way to see them.

(Note that the video is not available on the internet as there is no connection up the tower.)

Here are the setup instructions which have been tested on an Android phone and an iPad. Hopefully they will work for you too!
*** If you can get it to work on an i-phone, please let me know in the comments below. ***

With an internet connection (eg at home), go to the Google Play store (Android) or the App Store (iPad). Search for and install the application called KViewPro.

Now standing in the churchyard between the Abbey and the Gander Lane car park where you can see the nesting tray, search for and connect to the WiFi network called “Falcons”. The password is “peregrine”.

Now run the KViewPro application, choose "config" (or "device") and create a new device and set it up manually as follows :-

Then select channel 1 and maximise the screen to get the best picture.

A word of caution.
These are wild birds who catch and kill other birds for food. Therefore there may be scenes which some may find upsetting.
Donations.
If you want to donate to the project, please click HERE.
Remember to put the word "Peregrine" in the comments box!
Posted by David Bagley at 21:39 No comments:

Both birds getting the tray ready

The new gravel has been in place for just a few days, and both birds have been seen making a "scrape" in the stones.

Here are the male (CR) and then the female both getting it ready for the forthcoming breeding season.

(Apologies for the lack of sound. Hopefully this will be sorted out before too long.)