Off you go Matilda!

Matilda has now fledged the nest!

The moment of departure on Tuesday 25th was missed by the main camera which is at the wrong angle, however the other camera did manage to capture it.


This was no accidental departure, indeed it was a purposeful and strong flight and from what I can tell, she was more successful than Paddington was last year who needed rescuing!

By the squawking I heard last night, I think she is somewhere on the Abbey where her parents will bring her food while they teach her how to hunt on her own.

From now on, I suspect that she will be rarely seen by the camera, and I have now turned the WiFi link off as a result.

Posted by David Bagley at 08:27 No comments:

A photo of Matilda

She has been feeding herself with food brought by her parents, although she prefers to be fed as it's much easier! 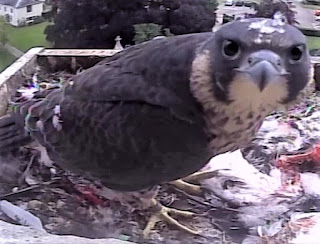 She has also been flapping her wings vigorously and will probably fledge (or fall out) of the nest in the next week or so.
Posted by David Bagley at 20:23 No comments:

The male chick Max died sometime on Friday night for some unknown reason.

The female Matilda still appears to be doing well and ought to fledge sometime in the next couple of weeks or so all being well.

Peregrines do suffer from a fairly high mortality rate, and unfortunately one out of three is about what is expected.
Posted by David Bagley at 17:27 1 comment:

As they grow, the chicks are becoming quite a handful, especially Matilda!

Here is Bellatrix arriving with some prey, which is immediately stolen by Matilda while Max complains to his mum that his sister wasn't sharing it.

Actually, Matilda is displaying typical "mantling" behaviour, shielding it for herself.

After this, Bellatrix took another minute or more, running from one side of the tray to the other, in order to be able to dish it out to them both!

You can see the longer version of this video HERE.
Posted by David Bagley at 15:02 No comments:

The Young Friends of Tewkesbury Abbey were asked to come up with a list of male and female names for the two chicks. From the lists, we have chosen Max for the male and Matilda for the female.

Here they are sunning themselves and watching the world go by...

As for the new female, we will call her Bellatrix, as we were tricked into thinking she was still Bella! (This will probably be shortened to Bella anyway.)
Posted by David Bagley at 22:04 1 comment:

Today was the day for ringing the two chicks. The ringing was done by the Gloucestershire Raptor Monitoring Group, and peregrine expert Ed Drewitt.

When Ed first arrived, he looked at the female peregrine sitting comfortably on the tower and observed that this bird still had some of its juvenile plumage, meaning that it was only into its second year of age. This means that this can not be the same female as we had last year, in other words this is NOT Bella! 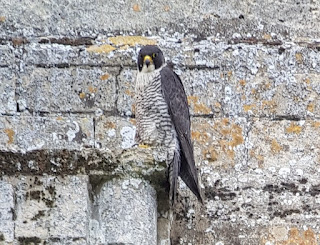 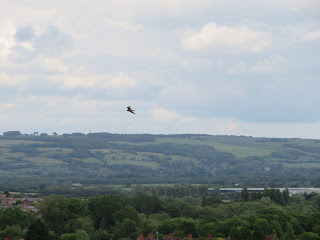 When the abseilers reached the tower roof, however, she flew off complaining loudly as she circled the tower. 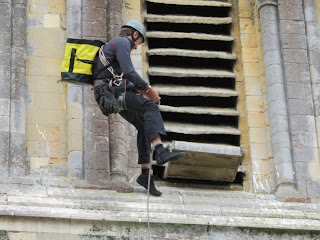 When Tim had lowered himself to the level of the nesting tray, he put the two chicks (and the unhatched egg) in his bag... 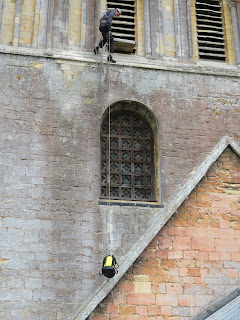 
With the chicks safely down, they were taken inside the tower where Ed had set up his table ready to process them.

The two chicks were laid out side by side on the table, and it was clear to see that the one on the left was indeed larger than the one one the right. 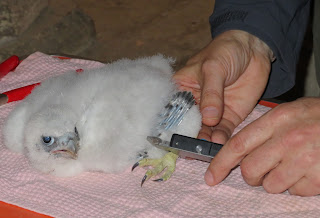 Firstly, some measurements were taken, including leg diameter and length, as well as that from the back of the head to the tip of the beak. After studying the vital statistics, Ed said that this indicated that the larger chick was a female, and the smaller one was male. 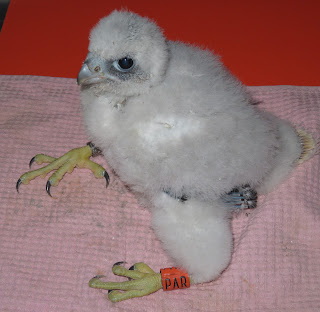 Then, each chick was given a ring on its leg, the female being "PAR" and the male "PBR" 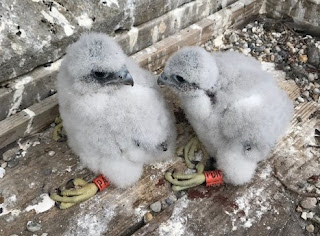 After this, they were returned to the nesting tray, where Tim took their photo.

Within 15 minutes of them being left alone once more, the (new) female returned to the tower and sat on the tray, no longer showing any concern for her offspring.

The Tewkesbury Abbey Young Friends have been asked to choose the names of the chicks, so watch this space for their (official) names. We will also need a name for the new female!

The two chicks are really growing, and one in particular does now seem larger than the other. Chances are that we have one male and one female, the females being larger than the males.

In this video, the larger one is nearer the camera.

Between feeds, they usually lounge about or sleep, and now that they are larger, the parents are no longer able to brood them both, so often perch on the side of the tray keeping an eye on them.

Ringing is due to take place in the next few days, during which measurements will be taken to try to work out whether they are male or female.
Posted by David Bagley at 12:28 No comments:
Newer Posts Older Posts Home
Subscribe to: Posts (Atom)