A pigeon makes a hasty retreat as CR lands on the nesting tray with some prey (a starling). Bella then lands, and CR lets her have it, possibly to prove his capability of providing food.

It's quite unusual for the camera to see any prey on the nesting tray. If they do successfully breed, then this will be commonplace, but they are leaving it a bit late again...
Posted by David Bagley at 18:48 No comments:

Both birds have been seen making a scrape on the nesting tray.

A close up of Bella.
Posted by David Bagley at 22:20 No comments:

A pair of peregrines!

Don't count your chicks though....!
Posted by David Bagley at 12:40 No comments:

CR and Bella together

Recently I installed Camera 3, a miniature camera which is positioned much closer to the corner of the nesting tray. This has proved useful already as we had a visit from Christopher Robin.

"CR" is clearly visible on his leg.

As you can see at the end of this clip, he was followed onto the nesting tray by the female Bella. CR didn't hang around though, as you can see from camera 1 (complete with audio).

Let's hope they haven't left it too late in the season to breed again.

Christopher Robin (aka CR) fledged from Christchurch Cheltenham in 2010 and has been a regular visitor to the Abbey tower over the last few years. Bella is unringed.
Posted by David Bagley at 12:16 No comments:

Apologies for the lack of updates recently. The problem is that there has been precious little going on. The cameras have only recorded pigeon visits to the nesting tray. All rather disappointing after all that has happened over the last few years.

I have had reports of a pair of peregrines being seen over the Tewkesbury Nature Reserve recently, and there have been lots of prey remains around the Abbey churchyard. A woodcock carcass was a recent finding, showing that the peregrines hunt at night with the assistance of the artificial lights in the town.

It wasn't until today that I caught a glimpse of one of the birds. 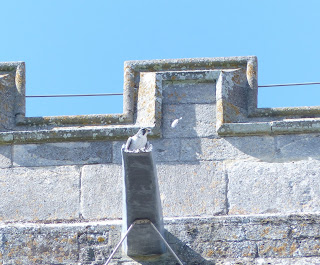 I think this is Bella eating her prey in the water chute on the east side of the tower, sending feathers flying in the breeze.

Apparently it's not too late in the season yet, so fingers crossed.