Bella in the sun

Bella was sitting on the west end of the Abbey today. 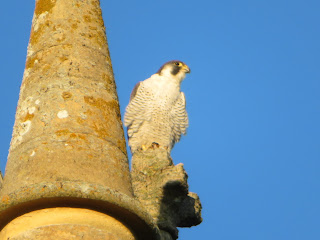 She was keeping watch for CR, who didn't seem to be around today...
Posted by David Bagley at 18:13 No comments:

There have been several more sightings recently.

Bella is on the tower and CR flies around (sometimes quite fast) trying to impress her! This is usually accompanied by lots of noisy screeching. 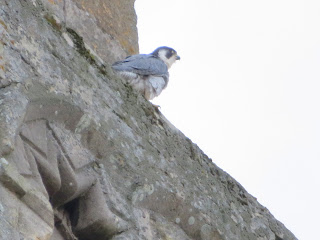 Here she is sitting on the NW corner of the tower. 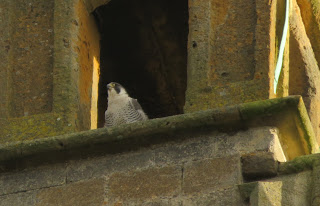 and here inside the NE pinnacle. I've never seen her sitting here before.

Posted by David Bagley at 18:44 No comments:

Welcome to the 2019 breeding season (hopefully!)

Things are starting to look promising!

Peregrines are not the quietest of birds, and several people have commented to me that they have heard lots of squawking coming from the direction of the Abbey.

I popped in tonight to see if I could hear or see anything. Only one (quiet) bird was visible right on top of the SE pinnacle, and from its size, I think that this is Bella. 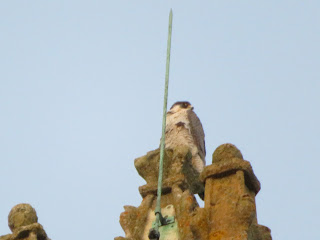 The other feedback I have had has been about the talk which took place on the 19th of January. There have been lots of positive comments which has been very nice to hear. The evening raised some £300 for Tewkesbury Abbey, and also nearly £100 for the Gloucestershire Raptor Monitoring Group. Very many thanks to all who supported this event. Chances are that it will be repeated in a couple of years time.
The Tewkesbury Civic Society have already booked me for their meeting on January 9th 2020 to talk about the Abbey's Peregrines. Hopefully there will be something about the 2019 season to talk about!