Here is a video of the male CR making a scrape in the gravel on the nesting tray.


Peregrines don't bother with making a nest as many other birds do!
Posted by David Bagley at 08:30 No comments:

It certainly looks like Bella and CR are ready to breed in 2019!

If you were lucky enough to be visiting Tewkesbury Abbey today you will have heard and seen lots of peregrine activity!

What is really exciting is that there were THREE birds flying around, but my photographic skills didn't manage to get a picture with all three of them. Here is a photo of a male (CR? aka Christopher Robin, upper) and female (Bella?, lower).  They were putting on a great courtship display, sometimes holding talons in mid flight, spiralling towards the ground. 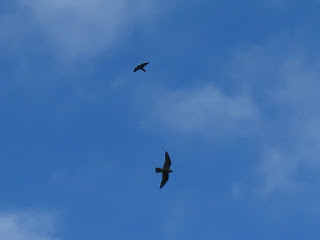 The third bird, who I only caught a brief glimpse of as he left a tree in the churchyard, had juvenile plumage with a lighter coloured front. It (I couldn't be sure if it was male or female) was being noisily chased off by the other two birds between their displays.

It is highly probably that this is Paddington, as I understand that a juvenile may come back to the place where it hatched at the beginning of the following season. 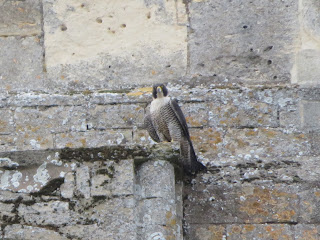 Afterwards, Bella sat on the tower while CR flew around and around defending his territory, keeping en eye out for intruders.

I have also heard on the grapevine that CR and Bella have been seen mating on the tower, so all is looking very promising indeed for the 2019 breeding season.
Posted by David Bagley at 16:32 No comments:

Bella has at last made a brief visit to the nesting tray.

She came back an hour later as well.

This time she flies away just as CR dives by. You can just see him in the top right part of the screen about 2 seconds after she flies off.

Posted by David Bagley at 22:40 No comments:

Just as in previous years, Bella and CR are keeping us guessing! Will they or won't they breed?

The usual sequence of events is that in March, they are rarely seen, but that in mid April they start to appear on the nesting tray calling noisily to each other.

CR usually sits on the right hand edge of the tray, so this year, a new camera has been positioned to get a bird's eye view of where he lands.

In the absence of a peregrine, a pigeon kindly acted as a stand-in to test the motion detection function of the camera!